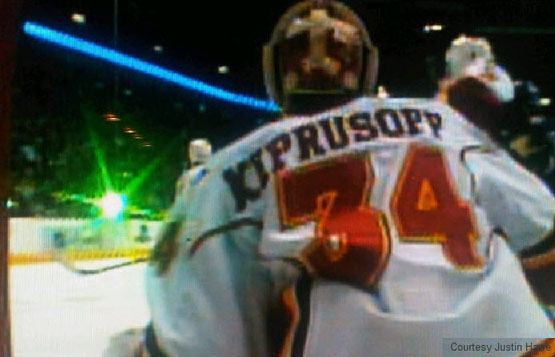 The Calgary Flames edged out the Vancouver Canucks in a shootout last week, 3-2, but the real story was Flames goaltender Mikka Kiprusoff making 19 saves while being nailed in the face with a laser for the better part of 60 minutes.

Flames coach Darryl Sutter was irate after the game:

“It’s ridiculous. We could see it from the bench, see it shining on his mask throughout the whole night,”

Since the game was played in Vancouver, more suspicion has surfaced – how could security fail to find the fan who was hitting Kipper with the laser all night? Some are already speculating that GM Place staff conveniently looked the other way, hoping for a home win for the Canucks.

Nashville Predators head coach Barry Trotz told the media before his team played the Canucks at home that he wouldn’t tolerate the same treatment.

“I’ll pull the team off,” Trotz said after his team’s morning skate. “They do that, then we’ll stay off (the ice)”

A laser assault on the Predators would be incredibly dangerous, considering the obnoxiously reflective qualities of their uniforms – it would probably blind everyone in the arena.