The Vancouver Canucks ripped up the San Jose Sharks Wednesday night 7-3 to take a hearty 2-0 series lead in the Western Conference Finals. In that loss the San Jose Sharks racked up a ton of penalties, 51 penalty minutes, and one Shark in particular was singled out for his actions.

Ben Eager, the Sharks left winger, helped the Canucks control the game by contributing four minor penalties, two of which were converted into power-play goals for the Canucks. Eager’s faults included a roughing penalty and a then a cross-checking penalty as well as a 10-minute misconduct.

Eager got a goal in garbage time of the game and afterwards stood over Canucks goalie Roberto Luongo and started talking smack. Not exactly his best moment.

The game overall was sad for the Sharks who possess a huge arsenal of offensive talent. But taking 4 penalties for stupidity is a huge hole few teams can dig their way out of.

Even though Ben Eager was the clear factor in the Sharks meltdown I can’t blame him too much. Maybe the NHL league office will suspend him for that cross-checking penalty but I would like to present some photographic evidence on why Eager was so distracted. And I don’t blame him.

Check out Eager in the penalty box. It’s NSFW and features a lovely Canucks lady leaning against the penalty box and pressing her bare boobs up against the glass. The Green Men are awesome but the flashing chick is better! I’d head to the box 4 times as well if you could guarantee that there would be hot chicks flashing me there. You can check out the uncensored picture here.

I’d be more than….Eager to do so! So check out the video below, while it’s still up, and just know that it does contain nudity. If you’re at work just tell your boss you’re watching sports highlights but know it is NSFW. 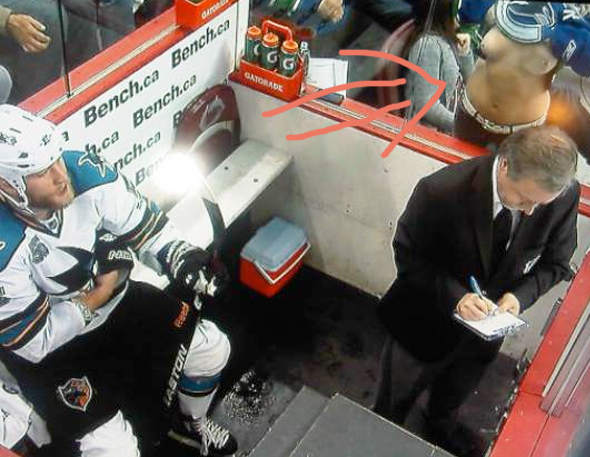