I’m not going to lie – I follow the Blackhawks more than any other team. I illustrated that in my first post here, “Will the Chicago Blackhawk’s Offseason End?” But this is an issue close to my heart for reasons that for the good of the NHL. I try not to be bias, and I do not think I am here.

It was been reported at the end of July that the new contracts of Marian Hossa, and Chris Pronger are under investigation by the NHL to see if they are “circumventing the CBA.” Hossa is scheduled to earn close to eight million the first handful of years in his contract, and in the last four years, it diminishes to nearly nothing.

Why is this a problem? Even though Hossa is getting that $7.9 million his first year his cap hit is closer to $5 million. In theory, if a team executed this constantly, they could actually be paying out $65 million to your team, and have a cap hit of only $55 million.

“But its twelve years,” you say. “When Hossa is making less than $1 million, his cap hit will be $5 million.” That is true for the ‘Hawks under two conditions. Hossa is still playing and is in Chicago.

Teams like Nashville, Los Angeles, and Phoenix all have some sort of financial issue, and are not able to spend money like Chicago, Philadelphia and other teams with plenty of money. Last year, the Kings had an issue with the cap – making the floor. A contract where the cap hit may be $5 million and you only pay the player $1 million looks very good, doesn’t it? After all, the organization is a business.

But what if Hossa retires 7 years into his contract? Because Hossa signed when he was under the age of 35, if Hossa retires for whatever reason he still gets paid his money and his cap hit goes away. In this scenario, the ‘Hawks would have had a collective cap hit of $36.4 million, and truly paid out $55.3 million – a difference of close to $19 million.

Chris Pronger’s contract is being investigated for the same reason as Hossa, but there’s a catch with Pronger. Does the contract signed mean his cap hit counts even if he doesn’t play? “But Pronger was 34 when he signed!” This is true, but the contract extension becomes effective when he’s the age of 35. Philadelphia rightfully challenged this ruling, and the CBA is a bit fuzzy in my opinion as to which category the extension falls into. If the NHL rules that Pronger counts no matter what, this will be a huge setback for Philadelphia.

I first noticed this “loophole” in contracts a while back when Detroit started handing out similar, but less extreme contracts. It did not occur to me that there’s a difference in cap hit, and actual salary until then. I thought it was just player preference. As long as the player retires before the actual salary is lower than the hit, usually these are smart deals for both sides.

To me, without question that the contracts of Pronger and Hossa were intended to get around the cap. The structure of their contracts say it all and the player’s are not going to care too much about when the money comes in. Where I have a big problem with the investigation is the NHL approved both contracts, then came back a month later and investigated them. The Flyers and Blackhawks did not give contracts that other teams cannot offer. These contracts are legal under the CBA and neither team should be punished for giving them out. But the teams where players do not want to go, like Edmonton, just lost the ability to overpay for players to come there. The big market teams are still able to throw their money around and overpay players under the CBA and that was the reason everyone lost the 2004-2005 season. Teams such as the Rangers were able to carry a team salary of $80 million, where Edmonton cannot get a player to come there.

My solution is simple. Modify the 35 and older part of the contracts to include everyone. For example, if you are 26 and sign a 20 year deal, you are going to have a cap hit no matter what for 20 years. If you get hurt, that’s part of the game. Every team runs that risk. This will discourage teams from handing out these long contracts. I also am a firm believer in if your salary is $5 million, your cap hit should be $5 million. You are only creating potential problems by making the salary hits and actual salary different.

It’s the off-season so to keep you entertained we thought we’d showcase one of the greatest bench clearing brawls in the history of hockey. This was in the 1987 World Juniors in a match between Canada and the U.S.S.R. The “Punch-up in Piestany” erupted halfway through the final game of the 1987 world junior hockey championship in Czechoslovakia. Canada was already assured a medal, but that didn’t stop them from throwing down in this one.

After the hilarity and gut wrenching laughter subsides from viewing this photo of actor Gary Coleman and hockey legend Mark Messier, head on over to Yahoo’s Puck Daddy for the back story on how such a thing could happen. ‘Hey Mess, nice facecloth’

The Los Angeles Kings started out quick and strong at the beginning of the season but soon faltered. Their failure to keep their winning ways cost them their coach as the team dismissed head coach Terry Murray Monday.

Their latest four-game losing streak didn’t help matters but for now assistant coach John Stevens will serve as interim coach. The Kings decided they needed a change as the team went 8-11-3 in their last 22 games, sinking them to fourth place in the division.

The anemic Kings still have time to save the season. In fact, I believe with a nice fire under them this team can make the playoffs (dependent on their goalies) and go a couple rounds deep.

The NHL Playoffs are starting to thin out as two teams have already advanced to the Conference Finals. Boston and Tampa will face off in the Eastern Finals while the fate of the Detroit/San Jose and Nashville/Vancouver series on the Western side are still fighting it out.

Over the years the glory of lifting up the Stanley Cup as hockey’s finest team is an honor that few sports can match. The Stanley Cup is one of the most recognizable trophies in the world. Having your name etched on a trophy for future generations to dream about winning is unique to the Stanley Cup.

Every player that wins the Cup gets the honor of having their name etched onto the side of the trophy and each player is reminded of their accomplishment with an individual ring to commemorate their Cup victory. As we continue on to find out who gets their name on the Cup this year here’s a look back at some of the Stanley Cup bling for the various teams over the last decade. 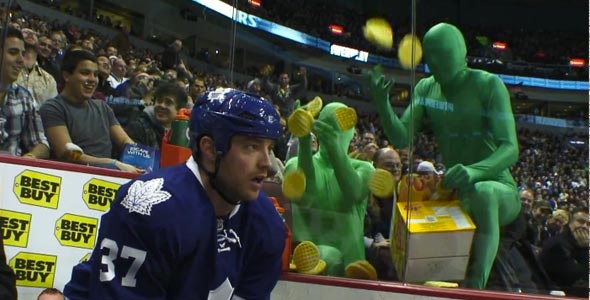 I honestly can’t think of a group of fans I love more than the Vancouver Canucks Green Men. Maybe it’s because I’m a huge “It’s Always Sunny in Philadelphia” fan. These guys are always good for a few laughs as they poke fun at opposing players in the sin bin.

Last week they got me laughing hard when the Toronto Maple Leafs were in town. That’s because they were going crazy with a bag of Eggo Waffles as Leaf players sat in the penalty box. If you haven’t been following the Leafs waffle troubles you can catch up here.

Also in the game you can see the Green Men offering Draft Picks for sale as well as pulling out their Santa Caps and Beards and going over their Naughty List. The guys brought their A-Game that night.

Between the everpresent (and slightly annoying) Reezig ads to the RBK Edge uniforms all NHL teams are wearing, the athletic apparel giant has left an indelible mark on the modern game of hockey. They’ve become experts at manufacturing hype for their athletes, and they frequently kick out viral videos like this one – where NHL star Sidney Crosby showcases his shooting prowess by moving the net onto its mooring with only his slapshot. But is the video faked? You be the judge:

I’m thinking this was doctored just a little bit. Hey, don’t get me wrong, Sid has an absolute cannon, but the net seems a little too jumpy, even without being totally secured to the moorings. If it’s actually legit, though, how incredible would that be? And if Crosby could do that to a regulation goal, I wonder if Shea Weber could do the same thing (he of net-snapping-Olympic fame).

Either case, Reebok is totally free to fly me out to Pittsburgh and see Sid duplicate this stunt in person.

As we draw closer to the Vancouver Olympic Games, another set of photos leaked – goaltender masks from a couple different countries were released online, and they’re pretty awesome. Goalie masks are one of my favorite aspects of the Winter Games; it’s a unique and creative art form that athletes use to express their patriotism for their own country. Personally, I really dig Vokoun’s mask the most, the U.S designs kind of look the same to me. I’m really interested in seeing what Team Canada’s masks will look like for Vancouver – extensive googling hasn’t turned up anything yet, but I’ll post them here once they’re available. I’m sure Brodeur, Luongo and Fleury are pulling out all the stops for their homeland crowd in British Columbia.

If you’re anything like me you must look at the speed, athleticism, and size of NHL players today and think that if they competed against NHL players 40-50 years ago there would be no contest. When I look back at vintage NHL video, I always wonder if they only look smaller and less athletic because of how little protective equipment they were wearing back then. Maybe they were just tougher though right?

Well when a friend of mine (not a leafs fan obviously) sent me this letter by email I just had to share it with The Puck Doctors readers. This is an actual copy of a Toronto Maple Leaf training camp invitation sent by Punch Imlach, to Jim Pappin, in 1962. I thought you would get a chuckle out of the 1962 conditioning requirements.

What sort of conditioning was necessary to be a paid professional athlete in 1962? 20 Push Ups, 20 Sit Ups, 30 Knee Bends, and some golfing and you’re good to go. Wow, when I look at the Leafs current win/loss record in 2009-10, maybe the problem is their expectations on player conditioning hasn’t quite evolved enough from 1962?

The Calgary Flames edged out the Vancouver Canucks in a shootout last week, 3-2, but the real story was Flames goaltender Mikka Kiprusoff making 19 saves while being nailed in the face with a laser for the better part of 60 minutes.

Flames coach Darryl Sutter was irate after the game:

“It’s ridiculous. We could see it from the bench, see it shining on his mask throughout the whole night,”

Since the game was played in Vancouver, more suspicion has surfaced – how could security fail to find the fan who was hitting Kipper with the laser all night? Some are already speculating that GM Place staff conveniently looked the other way, hoping for a home win for the Canucks.

Nashville Predators head coach Barry Trotz told the media before his team played the Canucks at home that he wouldn’t tolerate the same treatment.

“I’ll pull the team off,” Trotz said after his team’s morning skate. “They do that, then we’ll stay off (the ice)”

A laser assault on the Predators would be incredibly dangerous, considering the obnoxiously reflective qualities of their uniforms – it would probably blind everyone in the arena.